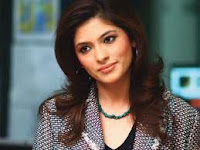 In her recent programme, she conducted a self-styled raid on a massage center in Lahore, accused it of being a "sex center" and harassed the women over there.

Although police was accompanying her, but she played being in charge, gave orders to policemen, like ان کو پکڑیں جی (arrest them), or یہ دروازے کھلوائیں جی (get these doors unlocked) etc.


In the programme, we see women helplessly trying to hide their faces, pleading the cameraman not to shoot. We also see the so-called anchor, searching through the house, going through handbag of a lady, putting the particulars on table, picking up a condom, flipping it in face of the lady and shouting "یہ کیا ہے، یہ کیا ہے" (what is this? what is this?).
Maria Khan also plays being an interrogator, cross-questioning employees, and when the answers do not match, telling the lady to "at least corroborate your 'bloody' story." During her 'investigation' she also threatens handing one woman over to the police if she did not tell the truth. At one point, not agreeing to the answers of her respondents, she says sarcastically, "yeah right, tell that to the cops when they take you."
At 19th minute of the programme, she is seen ordering the girls to "get up and get your passports".

At the end of the programme (approx 32nd minute onwards) she visits house of one of the girls working in the massage center. From there, she calls the father of the girl, and confronts him by saying کس قسم کے جاہل اور جلاد آدمی ہیں آپ (what kind of a cruel and ignorant man you are), and شرم نہیں آتی تمہیں، فوراً یہاں پہنچو (don't you have any sense of honour, get here quickly), and tells her audience یہ آدمی اپنی بیٹی سے دھندہ کراتا ہے، کس قسم کا جانور اور درندہ صفت انسان ہے (this man made her daughter a prostitute, what an animal he is).

And all the while, the programme was being supplemented with lines flashing this text

زبان سمجھ نہیں آتی مگر "کام" سمجھ آتا ہے
they do not understand the 'language' but do understand their 'work'. (this one referring to the Chinese nationality of the massage center owner)

Answers to all questions:
Conclusion:

We previously had a vigilante Maya Khan, she raided dating couples in parks; social-media protests made her apologise for compromising journalistic standards. So what shall we do about our new vigilante named Maria Khan.